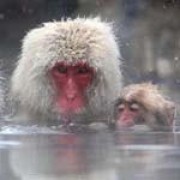 Middle of the night, we were woken up by the constant pounding of the wind against the window pane as Typhoon Jebi passed us above. Being a “typhoon virgin” , we were of course afraid that it might blow Pension Uni from its foundation just like Wizard of Oz… But thankfully, that didn’t happen. The old blue house stood firm withstanding the overnight onslaught.

We didn’t sleep much that night.

7am breakfast was served on time. There were only a few tenants that morning as transportation was halted for 2 days due to high winds and seas.

Since the wind had receded somewhat.. we took a short stroll outside the vicinity of the hotel to taste the tail-end of the typhoon. Even at that, the wind was still sustained with powerful body-moving gust from time to time. After a few pictures, we retreated to the pension for some R & R. I was still disappointed that we couldn’t do the 10km trek across the island after all the research and planning but … we could do it next time.

At noon, it suddenly went quiet. Guess our friend has made its way to Russia and beyond.

We walked to the nearby town to search for food. When we reach the pier, there was an eerie silence with only squawks of the seagulls in the air. No wind, no sound, no human. The lull after the storm I guess.

The sky was emerald blue and the shadow casted was different … it was as if the contrast was reduced and had a monotonous colour feel to everything. Coupled with the peacefulness, I’ve never experienced such a feeling before.

After soaking all in, kau liao, it is time to hunt for my unidon. Apparently the best uni is from around the region of North Hokkaido. Found 3 shops, 2 were closed… so we went in the only one, Robata Jidori (炉ばた ちどり) that afternoon. The tiny shop mainly does robata-style cooking (grilling fish over open charcoal fire), so it got the smell department down pat. Got myself a heavenly unidon (rice bowl) for 3800 yen I think (RM150 + – ). Expensive but since we came so far…. Hor ee khee. Elaine got the safer katsukare (curry rice). It was a bit too much uni in one sitting for me. Lol. It was better than most uni but still the best one was the one I had at the Pension Uni the night before.

After walking around the quiet town, we decided to head back for another round of r & r at the pension till dinner.

For dinner, Pension Uni served a unique fish called hakkaku which is only available at a certain time of the year caught in the region of Hokkaido. It had scaly exterior skin almost like a reptile. Despite the “exoticness” of it all – it still taste like a normal fish. Haha. Many thanks to the owners of Pension Uni – who described most things we gobble in detail. One of them is well versed in English so communication was not a problem.

We were knocked out pretty early that night after all the glorious food.

** Kansai region, in particular Osaka area, was beaten quite badly by Typhoon Jebi as it made landfall