I was working on some 3D stuff when suddenly the TNB-powered electricity supply decided to shut down half of our neighborhood of a good 1/2 mile in diameter, all shrouded into total darkness. As the last ions of the LCD monitor flickers into blackness, what to do? It was hot and stuffy indoors with those dang mosquitoes having a night brunch fiesta. I could almost here them guitaring little chorus of La Bamba in my ears. So off I go outside… cool air and…..

Gosh! what a sight… a sight I had almost forgotten. Above my head, everyday, it’s there for me to see it’s beauty. The stars. Those beautiful stars. Alpha Centauri. A celestial pageant. Big Dipper. Casseopeia. Mufasa….. erm, Mufasa? oops sorry, too much Lion King. It’s almost like a couple of years since I just had to turn 45 degrees upwards to see them beauty sparkles. Lazy me. I sat on the car porch leaning over my car, just doing nothing but looking at ze million dots. It was pure pure natural beauty. At least, I couldn’t see what NASA and the space race has done to the earth’s orbital waist with those jettisoned junks.

Anyway, it was only the killing of man-made illumination that made me see the naked natural sparkle of beautiful lights SO CLEARLY and it made me ponder on what had happened a couple of years back during the last economic recession. 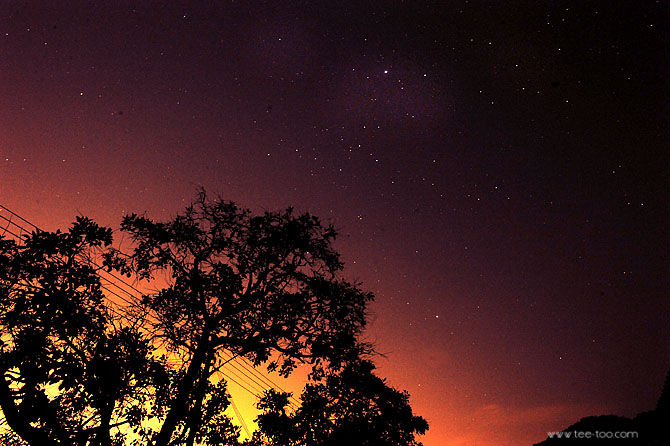 I was making quite a bit of cash then, was younger, had more hair and just bought a spanking new car. Things were looking so up, money was so easy, worked overtime, worked overtime sumore….. but little did I know, these were only material stuff that “blinded” me. These man-made material gains. Came back late, eat, sleep and repeat cycle until next bonus. Then it all came down with a hard thud, a VERY hard thud. Recession, too, began its vicious cycle. From all that is earned was spent. Money was hard… those material gains began to dissapear… fast… had to pay off car installment, bills and more bills. From the slow trickling into nothingness, downward spiral… other “light” began to appear, helping hands, the “stars”… yes, I began to appreciate the “stars” that light my darkest hour**… my parents and real friends. They helped me through this difficult stage in life, as I too, learned about being earnest, appreciating what is gained after that hard round of financial boxing. An eye opening bout that has me seeing more “clearly” and alway reminding myself to constantly – appreciate, appreciate, appreciate. There’s simply more in life than making money. It’s the simple natural things in life, like love, that shines brightest.

So, in this current state of economic uncertainty… remember there’s alwez lights all around us, little sparkles… all we need is to “open” our eyes to see them. If we do hit rock bottom, there’s always a solution  and finding the right “star” to guide us along is just as important. Very much the same as the North Star guiding the Vikings and Christopher Colombus alike (only for Nothern Hemisphere people ar).

Ahhh….. back to my stars…… simply beautiful, the way it sparkles and look a bit like my drandruff on my shoulders. kaosai relli. Need to do this more often. APPRECIATE………….